From Weaponized Social
Jump to navigation Jump to search

For a framework to examine the scope (here, time and memory) and scale (here, size of participating population) of interactions, the following examples are useful: 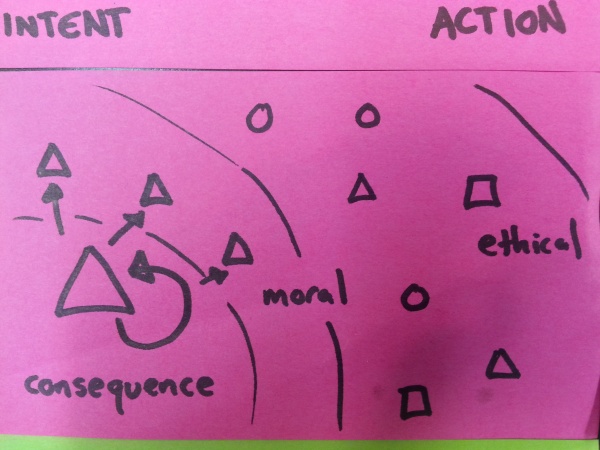 The social strategies we use intentionally, particularly those we enshrine as character values, are often geared toward the lower end of this scale -- one-off interactions with a single other person, repeated interactions with another person or small group. Strategies best applied at the upper end of the scale, toward whole communities or societies, tend to be categorized in an practicality-agnostic framework such as morality or religion, sometimes more just-so-story than ethical reasoning, and without rigorous examination outside special fields of study. The typical person's strategies for dealing with social media, for example, are not designed for the scale and scope of that environment and don't have understandings of its muting and amplifying effects built in. In some fields where such strategies are examined specifically on grander scales, the lack of consideration of the shaping effect of current media may prevent direct translation of lessons learned into engineerable practices.

Game theory offers one way to examine the scalability of these virtues: What is the effect of forgiveness on an entire society? (It's great for the society but possibly bad for the individual.) What is the effect of loyalty on an entire society? (It can be a survival mechanism for the individual, but crushes diversity in the society.)

One virtue the conversation gravitated toward was that of self-reflection, particularly a pause for self-reflection in the middle of conflict-exacerbating or hostility-reinforcing patterns.

Reflexive/intuitive thought can tend more toward the former, increasing conflict more than producing solutions. Measured, effortful thought can help emphasize the latter. However, it's the reflexive/intuitive system that determines what's worthy of effortful thought. How can people be encouraged to think about their anger, hurt, or other negative emotions and how to direct them productively without transferring them to the next person or situation that comes along at random, and without taking out frustration with an entire pattern on a single example?